If you have store cattle to sell and want a word before booking them in, speak to Alastair Sneddon on 07973 982441.

There were 96 cattle in the finished section with trade at a level to encourage the store purchasers.

In the sheep section supplies of old season lambs are dwindling and spring lambs are still in short supply.  Both factors that are ensuring that prices are maintained.

Old Season Lambs span a great range of quality at this time of the year.  The best on offer sold to 380p and £170.05 per head with the SQQ at an outstanding 320p.

Cull sheep not particularly plentiful and the 293 on offer sold exceptionally well with ewes to £156 ave £103.60

We have been asked to inform you that Mr John Gould of Cliffe Farm, Chelmorten has passed away.

The next ‘Orange Sale for TB restricted cattle will be on Friday 21st May, all enquiries speak to Oliver Hiles on 07801 580933.

For the avoidance of doubt, we will be holding the regular market on Monday 3rd May. 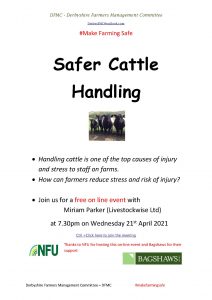 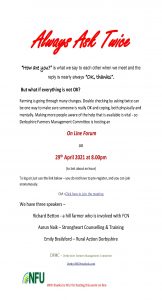 Trade remains sensational and looks to be the “new normal” as cows for the 4th week average over 150p/kg or over £1000 head.  52 vendors today replying to my requests for cows and there would be no disappointment as cows were simply on fire again!

Trade remarkable just as last week an many more could have been sold without affecting trade.

Even dearer than last week’s flyer with 36 vendors today selling to 18 different accounts, including a couple of returning customers.

Similar numbers and trade with the best actually dearer on the week.  Prices topped at 271p for a tremendous Limmy from Messrs Hollinshead, Lichfield and closely followed at 270p for another Lim from Peter Gaunt, Dronfield and both were purchased by RW Walmsley, Quality Butchers at Catterton, York.  Stuart Wainwright had 269p and Nigel Birch 258p.  5 Hereford to 211p/kg and 2 S Horn non breeders at 180p.

An impressive entry of 446 stores which included some superb cattle which sold at very remarkable prices.

Everyone is concerned about the continuing dry weather and cold nights but there was no sign of this affecting the trade.

We had some lovely level lots with bunches of up to 10 animals filling the ring and giving buyers the opportunity to ‘push the boat out’ and secure a decent lot at one go.

A few more vendors in the market today representing their cattle albeit at a safe distance.  Everyone did as was asked and their co-operation was much appreciated.

The sale started with breeding cattle and we were blessed with some fine examples which sold well and set the trend for the rest of the sale.

There was another consignment of in calf Lim x heifers from GC & BJ Cresswell of Atlow out of their British Friesian milk cows and in calf to a Lim stock bull for June, the attracted plenty of interest selling at:

There were 42 Feeding Bulls with examples as follows:

A record average for a Monday sale the result of two factors, firstly a wonderful sample of cattle and secondly an outstanding level of trade pushing the best on offer over £1500 an unheard of price in the store ring.

The following results indicate the level of trade:

A good selection to suit buyers at all levels with a very strong trade from start to finish.  Buyers operating for feeding, breeding and grazing animals.

Another sharp trade for all types with B Blue bulls to £400 twice and Charolais heifers to £360.

Second quality sorts equally as keenly sought after and the B/W up a gear today to a top of £175.

Could all ARLA producers please indicate so on their entry form.

Despite having a dedicated day on Thursday to sell ewes and lambs we still had 26 head on offer with Mule doubles to £120, Suffolk x doubles to £120 and Texel single to £86.