With the exception of Store Cattle all sections were well supported and trade very satisfactory.  A total of 200 cattle and 1,313 Sheep on offer.

Vendors of Store Cattle have opted to enter their stock for Monday 10th January and there should be sufficient numbers to mobilise the longer distance buyers for next Monday’s sale.

What few stores there were on offer attracted plenty of interest and fierce competition with all vendors more than satisfied with the result.

In the Finished Cattle section 94 head sold on a decent trade with top figures of 289 pence for both Steers and Heifers.

The overall average a tremendous 140.8 pence.

There were excellent entries in the Sheep section for a Bank Holiday market with 1,065 what are now called ‘Old Season Lambs’ on offer.

Trade was fantastic for the 236 Cull Sheep with ewes to £194 and an astonishing average of £118/head. 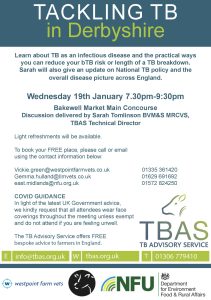 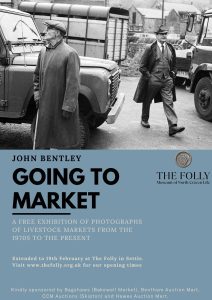 OPENING OF THE BAKEWELL T.T MARKET 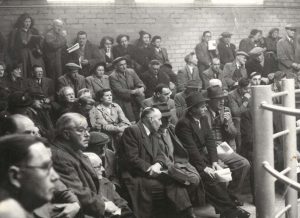 This photograph has been kindly provided by David Hadfield of Wheston

Do you recognise anyone??

Half numbers for the New Year sale and cows have kicked off the year considerably dearer than they finished in 2021.  All the regular buyers at ringside looked like they meant business today and had to ‘step on’ if they wanted to buy them.  Top price today was 196p for a 29 ½ mnth old (1 calf) Simmental from the Jackson Family, Wardlow with Charlie Taberner at 193p for a 1 calf (40 mnths) Limousin.  No show stopping cows today but some good, well-fed commercial meat cows for the buyers to bid 150-180p for.

Much dearer than last year.

A good turnout for the first sale of the year, particularly on a Bank Holiday as it was.  Many thanks to all vendors for sending cattle today and being well rewarded with a full line up of buyers at ringside and all accounts operating.

Don’t look at the average as it doesn’t tell the whole story with only 6 suckler bulls today and selling up to 246p for a Blue x Lim from John Ottewell closely followed by a posh Limmy from Robert Merryman at 245p.  Friesians sold to 184p for Steven Potter, Bonsall.

A good show with something for everybody including some special big Bullocks at the top end.  Don Lownds won the day with his trio of red Limousins at 289, 278 and 266 grossing up to £1866.  Dennis Prince and David Hadfield both had 270 for strong meated suckler bred sorts.  13 Native Angus to 256p with 8 B/W selling to 193p.

Just like the Steers with a few specials on offer, but also some good commercials and a number of natives and B/W to pull the average.  Roger Tomkinson had the trade selling to 289p for a butchers Blue.  Don Lowndes had 3 heavy’s all in the 280’s with Mark Hadfield back selling at 273p.  8 Natives had Angus to 244p and Hereford to 212p with 3 B/W non breeders selling to 172-174p.

Only a handful of cattle on offer, but those who chose to bring them were rewarded with a tremendous trade.

Trade dearer than seen for some time, with all types in extremely strong demand.

Not many Black & Whites forward but those present were rewarded with a strong trade for all with a top of £200.

Just one pen of long-term Store Lambs sold at £70/head.

The Bank Holiday saw a few less but the trade was excellent from start to finish and all categories sold well.

Jason Craddock made the journey down from the north yet again to top the day with his excellent Texels at £194/head with his total entry averaging a superb £193 each.

Best Continental £140 to £168 dependent on style and size with best Mules towards the mid-£120 range.

Gritstone Ewes made over £100/head and plenty of demand.