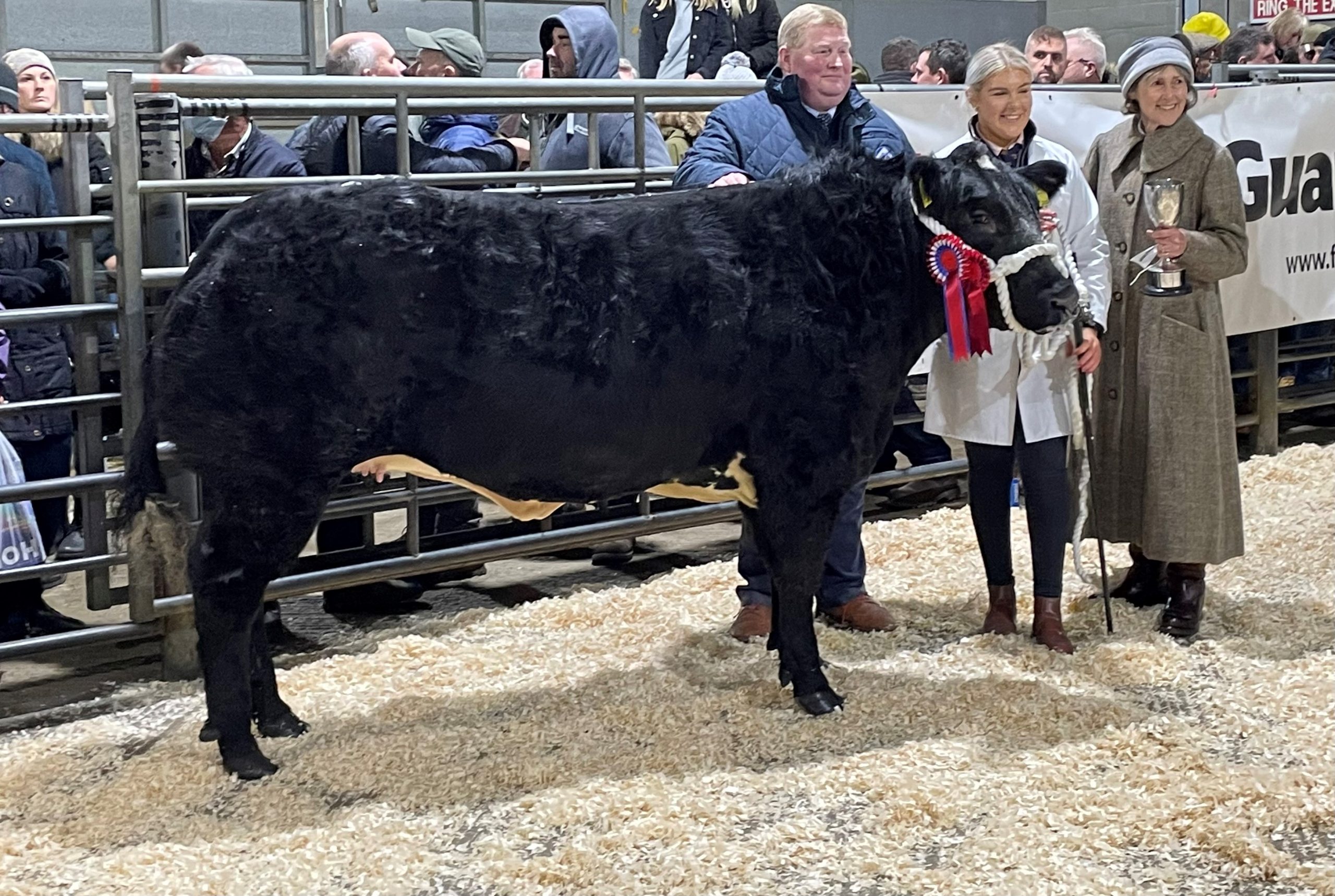 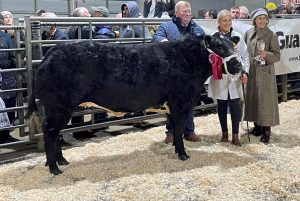 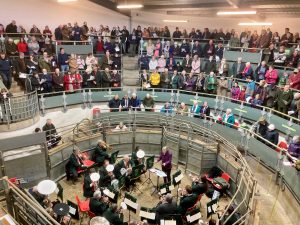 After a well-attended show and carol service on Sunday afternoon the Monday market saw the show stock sold at record prices.

The champion beast the property of Ellie Wynne of Snitterton, near Matlock sold at an astonishing £10.20 per kilo to gross £7,140 to B & T Kitson of Stockton

The Champion lambs from MJ Wells & Son of Monyash realised 600p/kg and £246 per head and were purchased by RC & L Bowring of Warsop.

Full details of the show can be found later in this report.

It is usual for stock numbers to be down on show day, but because of the wintry weather over the previous weekend when travelling was difficult or impossible there was a carry over of stock resulting in 707 cattle and 1,491 sheep on offer.

The Store & Breeding section badly hit by the weather last week was back to strength with 395 head of stock on offer.

Plenty of interest and a great trade from start to finish.

There was an excellent entry of 148 Finished Cattle with average prices enhanced by the presence of the show cattle. Even so the figures were impressive with 58 Steers averaging 247.6p, Heifers ave 279.0p and 22 Bulls ave 234.5p.

Unusually for show day there was a decent crop of OTM and Feeding Cows.

In the Sheep department there were 1,228 lambs on offer.  Trade was outstanding with the SQQ average at 295.7p and although this figure included the show lambs the remaining sample was very varied.

Friday 10th December: Final Round up of Store Sheep 2021

A Celebration of the life of the late

A good entry of cows that included a few special sorts for the Primestock week.  5 different cows topped £2 from 5 vendors with the highest price being 220p/kg for Bernard Perkins, Oughtibridge selling a 4yr old Limousin to gross £1518.  Better sorts generally 155p+.

More on offer and another strong price.

The Champion Presentation with the judge Phillip Parkin, Ellie Wynne holding the champion and the Duchess of Devonshire presenting the cup.

Bakewell Primestock Show and sale is fully established as one of the premier two-day primestock events in the country. The format works exceptionally well with the show of the stock being held on the Sunday afternoon with a massive crowd of spectators enjoying the festivities and Carol service. The stock is then held overnight and sold in the relevant sections on the Monday to a large band of buyers who descended from all corners to buy the show stock.

A massive crowd descended on Bakewell was present on Sunday 5th December for the Annual Carol Service, the Cattle & Sheep Show as well as a superb Hog Roast in the market concourse.

The Judging for the cattle this year was carried out by the well-known character, Mr. Phillip Parkin of Parkin Family Butchers at Howden, East Yorks. Many will have seen his weekly blog on Facebook. He did the most thorough job that anybody could have wished for and inspected every animal until they were satisfied with their placings. The quality of the cattle on offer this year was outstanding, it seems to get better and better each year and the judge was rightly impressed with the cattle.

Phillip selected an outstanding heifer to win the show.  A massive, 700kg British Blue Heifer that won the junior Heifer class and went on to be overall Champion from local show team of Michael and Ellie Wynne from Snitterton, nr Matlock. The Duchess of Devonshire was at ringside and enjoyed watching the judging and engaging with the farmers. She presented her families Devonshire Cup at the culmination of proceedings. The Champion sold on Monday to the Judges father on behalf of Mr Anthony Kitson, for his Five Houses Farm Shop at Yarm, Stockton on Tees.

Reserve Champion on the day, was another superb Blue X Heifer that was shown by Powdrill & Dickinson, Heage. This heifer won the Senior Heifer Class and weighed in at 570kg sold for 790p to gross £4,503 and was purchased by Peter Maycock Butchers at Openwoodgate, Belper.

Best Opposite sex to the champion and Champion Steer was a wonderful Black Limousin from regular exhibitor at Bakewell P & B Hodgson, Tumbywoodside, Lincolnshire. The steer weighed in at 652kg and sold for £4 and was purchased by Richard Taylor on behalf of his family firm, Owen Taylor & Sons Ltd, Leabrooks 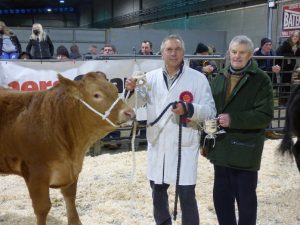 Champion Steer from P and B Hodgson, receiving the trophy from Stephen Flewitt from Bakewell Show.

Champion Homebred beast this year was from a new exhibitor at the Bakewell primestock show. JB Thompson showed 2 homebred heifers this year with Shield winner being a massive 788kg Black Blue Heifer selling at 325p to gross £2561, selling to Owen Taylor & Sons Ltd, Leabrooks. Team Thompson rounded off their day selling their other heifer at £4

A new trophy that was first presented in 2018 was kindly donated by Robert Walker, past Chairman of the High Peak Livestock Society and a grand supporter of the market. This was given to an exhibitor bred and fed beast and a member of the HLPS. The winner this year was local, regular supporter, Nigel & Julie Birch, Monyash who showed a very sweet. Limousin heifer at 320p, being purchased by H. Meakin, Quality Butchers in Leek.

The High Peak Livestock Society Cup this year was won by Thorp Farms, Baslow who had a Red Limousin selling for 300p and being purchased by RW Walmsley, Butchers at Catterton, York

A Young Handler class, first introduced in 2015 to recognise the amount of young talent that show cattle at Bakewell. It takes a lot of hard work and dedication to get cattle trained for showing and if it wasn’t for the interest shown by these young people on their family’s farms, then some of the cattle would not be brought forward for showing. This year there were 6 youngsters, aged between 16 and 19 years, competing for the trophy and it was the youngest of these, Fred Powdrill Swinscoe from Belper who was triumphant.

Best Opposite sex to Champion

A smaller entry of show lambs forward this year for the judge Mr Robert Bowring of Mansfield.  He chose for his champions a pen of 41kg ¾ Beltex shown by Messrs MJ Wells & Son of Monyash which went on to sell for £6/kilo grossing £246/head.  All show lambs averaged 320p/kg

With the extra cattle that failed to make the journey to Bakewell last week there were 395 on total.  This entry had attracted a strong line up of buyers and trade was good from first to last.

The sale commenced with 33 Breeding Stock which included

A decent selection with plenty of buying power in operation and recent levels of trade maintained.

Angus and Hereford crosses well bid for as were the few Black & Whites.

Some excellent bunches of heifers attracted plenty of interest from both feeders and breeders.

A rattling good trade from start to finish with sample prices as follows:

Some nice B Blue Bulls saw a top of £420 with Angus to £295 and Salers to £270 with less quality and smaller types equally as sought after.

Black & Whites again saw strong interest with the better end up to £100.

A very good show of 1491 head of sheep included 1231 lambs.  Demand very brisk even for non prize winning lambs with meated sorts in the 300-330p/kg range depending on weight.  The overall average 295.77p/kg

A total of 260 cull ewes and rams attracted very brisk bidding for all types with more needed to fill demand.