An excellent Show & Sale on behalf of the Shorthorn Society as part of the monthly Pedigree sale this Tuesday. Top price of £2120 for a heifer from the Steeples family with the Shorthorns selling to £1860.

Cull cattle trade remains hesitant, but a strong entry forward, with barrens selling to 129p/kg for a Hereford cow, with clean cattle to 176p/kg.

Less calves about and buyers about for them, but a top of £310 for a British Blue bull calf with heifers to £270.

A nice entry of pigs this Tuesday, with all qualities forward, selling to 128p/kg for cutters, and sows to 58p/kg.

Trade still similar with a nice number forward. Top price of 176p/kg for a 515kg Limousin steer from Hambleton Bros. Other steers sold to 152p/kg for a 610kg Limousin from A W Kennerley & Son, Betley, with a 590kg Hereford from R G Chaddock, Gillow Heath.

There was a tremendous atmosphere at the monthly Pedigree Sale at Leek on Tuesday which also incorporated the Autumn Shorthorn Society Show and Sale which attracted a fantastic entry of 57 Shorthorns.

The line up of Shorthorns was a very impressive sight and the judge for the day Robert Crank pulled out two outstanding animals from the Amber Herd of Messrs Hole for his Champion and Reserve (Photo below).

Taking the crown was a third calver Amber Lovely Lily 41. By Amber Sir Lancelot this 41kg cow attracted great interest in the ring but was eventually clinched by the judge for £1800.

However it was a Cotonhall heifer from Rob and Katie Kite that topped the Shorthorn entry at £1860. The Skyhigh Oscar daughter Cotonhall Oscar Marilyn boasted 2 generations VG and was sold giving 26kg. She went to join the Shropshire based Appleberry Herd. They also had a March born calf Cotonhall Joyland Rosepetal reach £610 to join the Weaverdale Herd of Messrs Pattinson and Kirkham.

The pedigree entry was lead by a superb heifer from Roger and Diane Steeples at £2120. Hot in pursuit at £2100 was a stylish heifer from Andrew Weston with Messrs Easom taking home £2080 for one of their milky Broomhouse heifers.

A great entry of Stock Bulls topped at £2010 for a pedigree Limousin from the Furness family of Peak Forest. 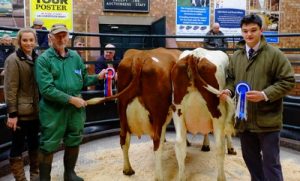 Similar number of pigs about and trade a little less.

Good to see more lambs about this week, and trade pretty firm on the week. Top price of 200p/kg, with an overall average of 157.6p/kg with plenty of heavy lambs forward affecting the average, but a very creditable SQQ average of 163p/kg.

A strong trade again this week, and continuing to sell well. Top price of £116 for rams from J & DM Mifflin, and £105 for ewes from Roger Bailey.

A few less on offer with trade very similar overall.

Where have all the good bulls gone to with buyers wanting calves. Top bull today was £310 for a Blue from Messrs Hulme, Basford with only a handful better sorts over £250. Mediums £160 – £200 with small under £100.

Sale to Commence 10am

Sale to Commence 10am